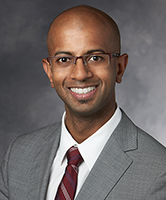 Dr. Andrew Thamboo completed in undergraduate and medical degree at University of British Columbia (UBC).  He stayed at UBC to do his residency training in Otolaryngology-Head and Neck Surgery.  During this time, he obtained another degree in Masters in Health Sciences concentrating on study design and epidemiology.  He spent particular time training under Drs. Amin Javer and Arif Janjua in Rhinology as a resident.  He was awarded the Dr. I.B. Holubitsky Memorial Award for demonstrating the highest of surgical excellence at UBC. Dr. Thamboo got accepted to the most coveted Rhinology and Skull Base Fellowship at Stanford University.  He trained under Drs. Peter Hwang, Jayakar Nayak and Zara Patel and after spending a few years at Stanford, he was recruited back to the UBC. Dr. Thamboo medically and surgically manages chronic sinusitis and sinonasal tumors at St. Paul’s Sinus Centre and at Surrey Memorial Hospital. He also has a cross appointment with Vancouver General Hospital and Royal Columbian Hospital performing skull base procedures with the Neurosurgery team. Dr. Thamboo is the Research Director of the St. Paul’s Sinus Centre.  In collaboration with Respirologists, he has a lab associated with Heart and Lung Institute. Dr. Thamboo has an interest in areas of unified airway hypothesis, upper airway physiology, office based rhinology and outcomes research. He is a recent recipient of Michael Smith Foundation Health Investigator Award.